Isabella died in 1895 aged 36 and his father married Christina Bain on 12th February 1897 in Glasgow.

Gregor was a skilled musician but his stepmother was envious of his talent and would lock the piano, he joined the 2nd volunteer Battalion HL1 as a band boy at 14 and then transferred to 2nd Battalion Argyll and Sutherland Highlanders to be solo cornet and solo euphonium. He was also principal violin in the Regiment Orchestra under F.J.Ricketts (AJ Alford) who later wrote Colonel Bogey and other marches.

He passed the entrance examination to the Army School of Music in 1914 but, instead of going to school, he was sent on active service in France then East and West Africa. He obtained a commission in 1st Cameronians.  Gregor  married  Catherine (Katie) Cameron on 23rd July 1909 in Durban, South Africa where she was born, they had three children,

Margaret (Rita) Gregor James and Donald Kitchener (Kitchie).
Rita married  Duncan MacTavish and had three children, Ronnie, Renee and Donald (aka Grant).
Gregor married Eba McIntyre and had three children, Gregor, Ian (aka Donald) and Simone.
Kitchie joined the RAF and was killed in a Lancaster bomber on 23rd May 1944, he was engaged to be married.

After completing his army service in 1922 Gregor concentrated on training brass bands, composing, arranging and teaching.

He was on the staff of the Royal Scottish Academy of Music as teacher of euphonium and tuba, and was passionate about the benefits of playing and listening to music especially for children living in povery in Glasgow slums.

He conducted the Govan Burgh Band from 1924 and the Bonnybridge Band from 1925 and coached many bands for contests. He joined the Scottish National Orchestra in 1929 with a break to return to army service with the Royal Artillery in WW2.

Brass bands under his baton won many national competitions and on 21st May 1929 at The Peoples Palace in Glasgow he conducted two bands to receive 1st and 2nd place. 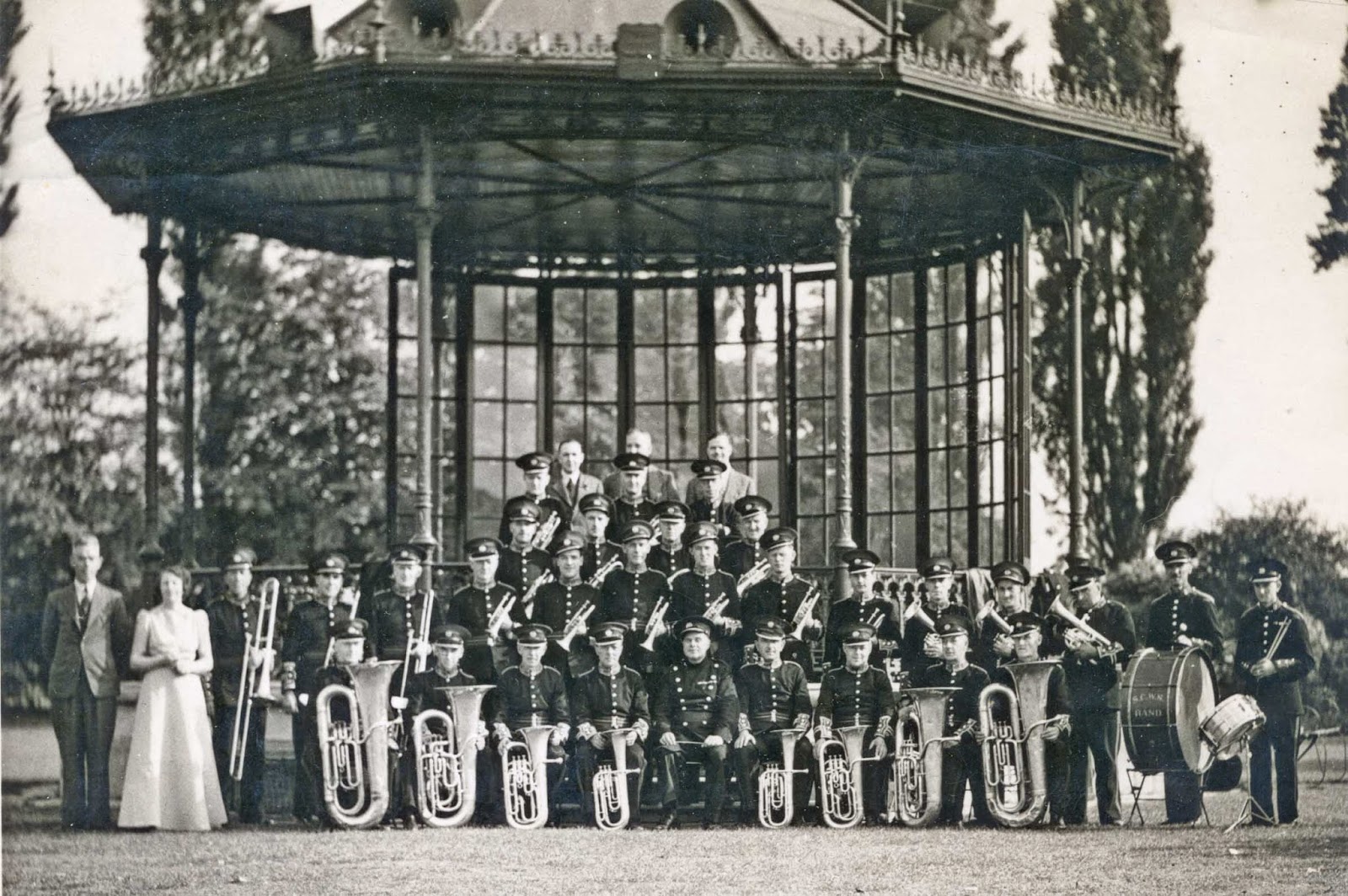 15th May 1931 Daily Record “ Great credit must be given to Lieut.Grant, as not only has he made his band one of the foremost in the country, but he has also, by the application of modern methods of arranging and by adapting the compositions of composers new to the brass band world, been essentially responsible for the increase in popularity shown by the public to the bands of Scotland.”.

23rd October 1932, Broadcasting News  “ Lieut. Gregor J Grant has discarded the conventional idea of what music is suitable for Brass bands and has arranged a programme with a judicious mixture of light and classical music”. 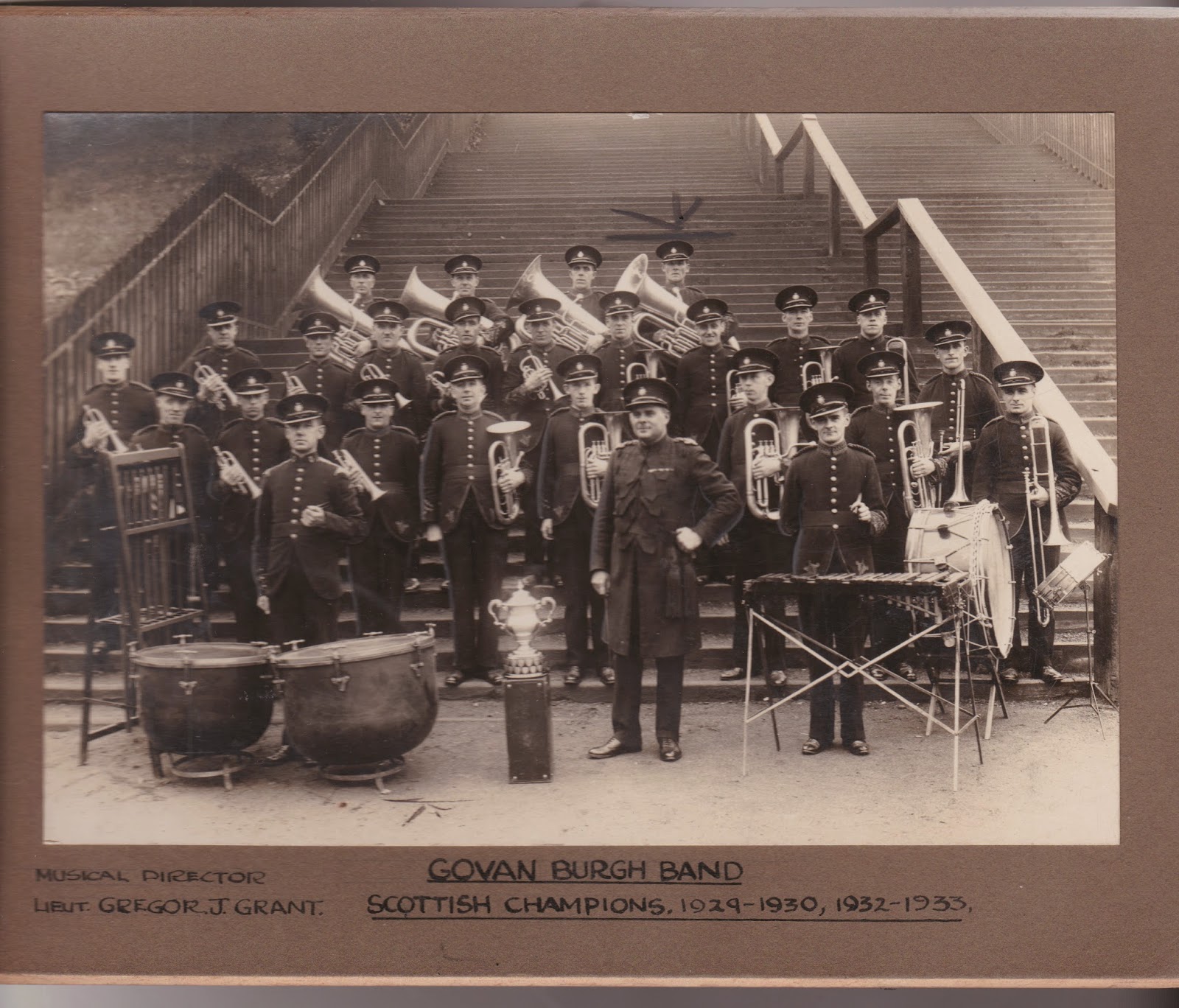 "There is more than one Czech national anthem so Captain Grant, after listening to Prague Radio selected the correct one. He bought a copy of National anthems for the Olympic games from Leipzig but, as there were no arrangements for brass, he had to transcribe and arrange them for his band to rehearse. The music was a great success and Scotland won 5-0."

He was dedicated to the bands he conducted and was rewarded with their loyalty and respect. From comments in various newspaper clippings, he was very popular and entertaining and also modest. When praise was heaped upon him he always acknowleged the band members and after particularly fulsome applause would always bring soloists forward and thank the band. 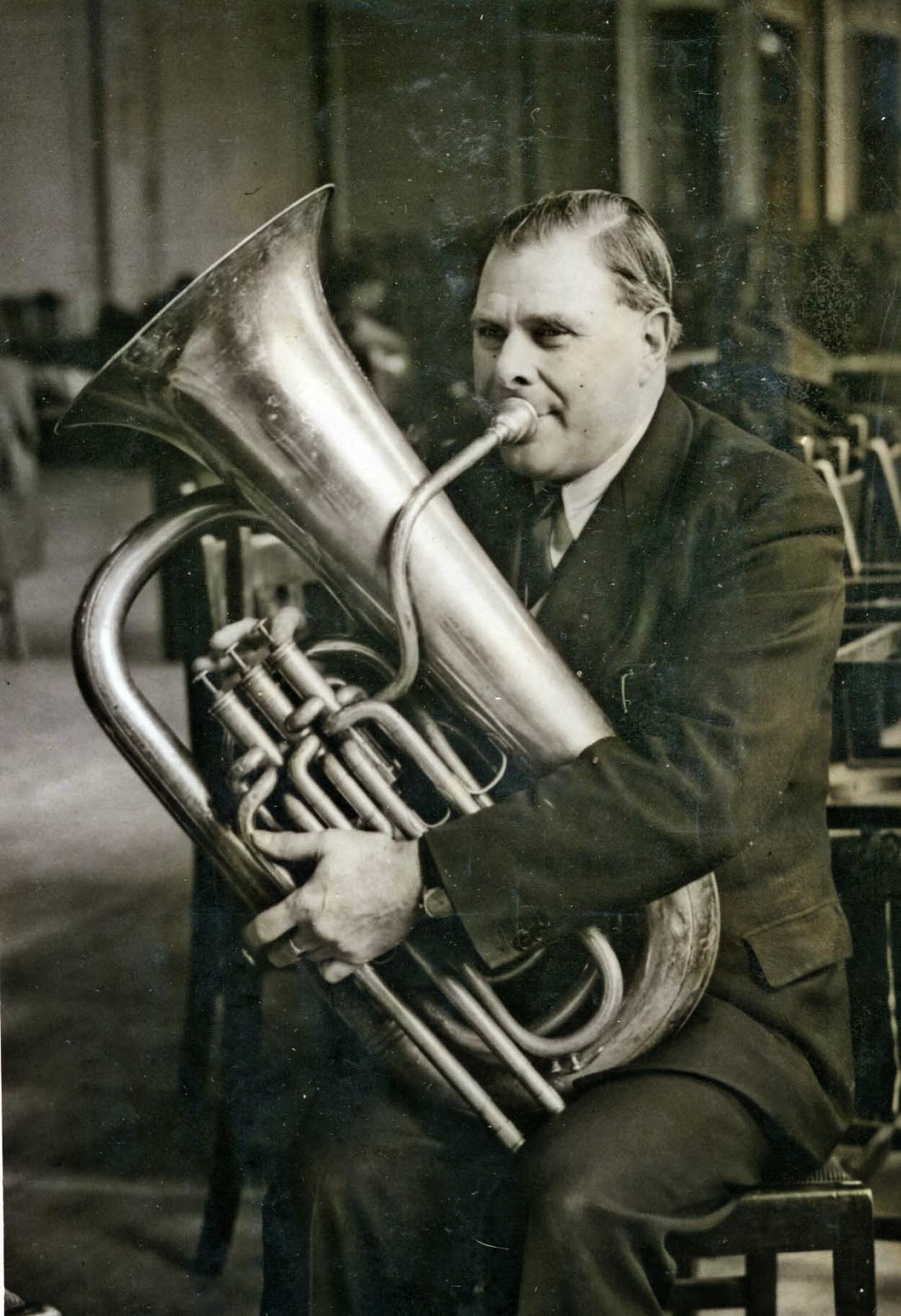 Whether playing in the Albert Hall, Band stands, market places or recording he loved what he did. 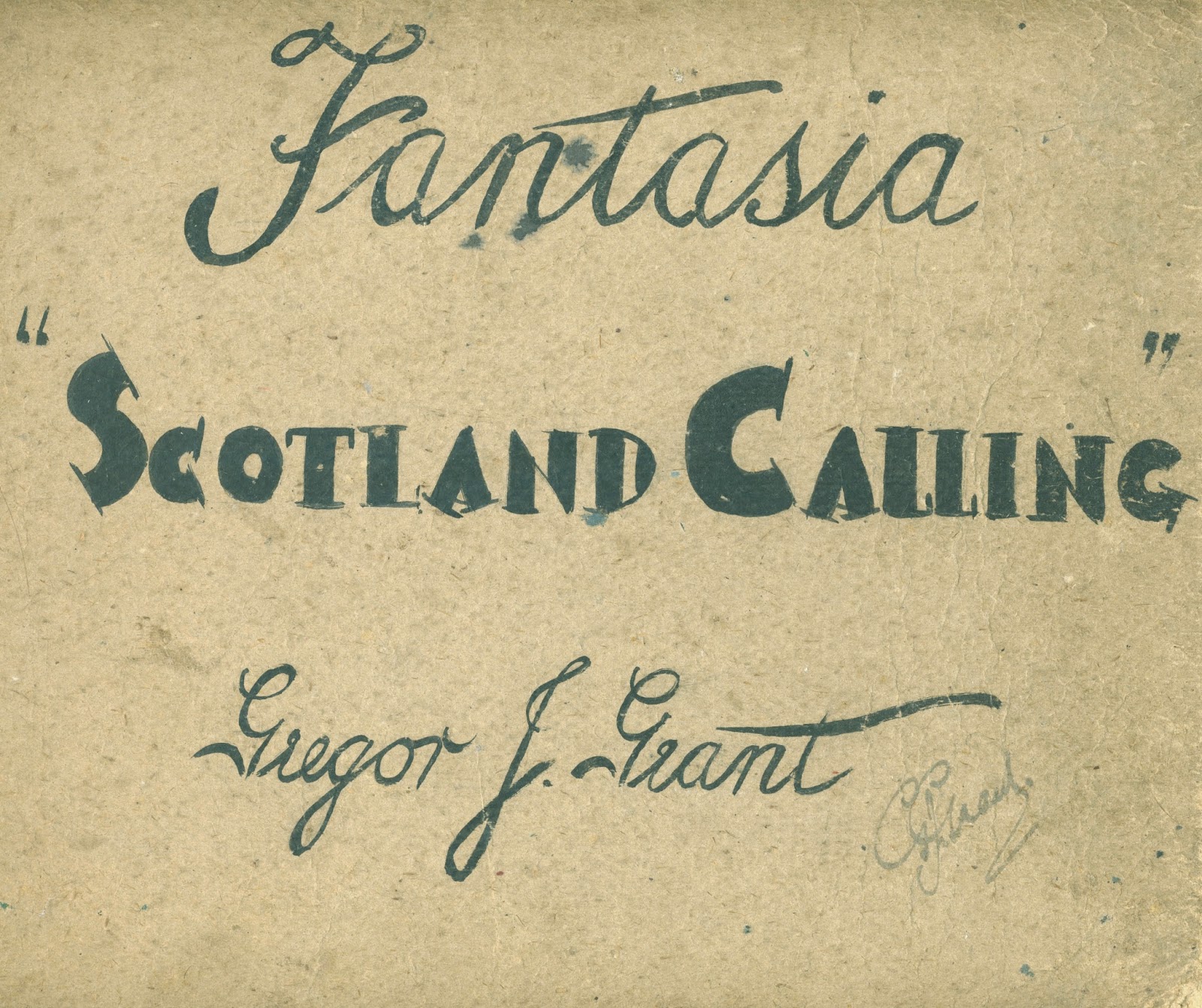 Although teetotal and a supporter of the National Temperance Society (founded in 1855), Grandpa was a generous host and always had beer and spirits for his guests. He would mix alarming cocktails not having a clue as to the strength of his concoctions – parties were great fun.

His wife Katie died at home 23rd August 1955. We were all staying with them and her coffin was placed in the front room. Due to her illness, Granny had been unable to talk so as a wee girl I was unfazed that she didn’t reply to my chatter.

Grandpa kept very busy, teaching, conducting and adjudicating he also had hobbies.
He enjoyed driving but wasn’t very good – he wore out gear boxes and clutches but refused to get an automatic. We would fight to sit in the back seat instead of the front, which was what most children wanted. If he went through a red light he would be indignant saying that it ‘wasn't there yesterday’. 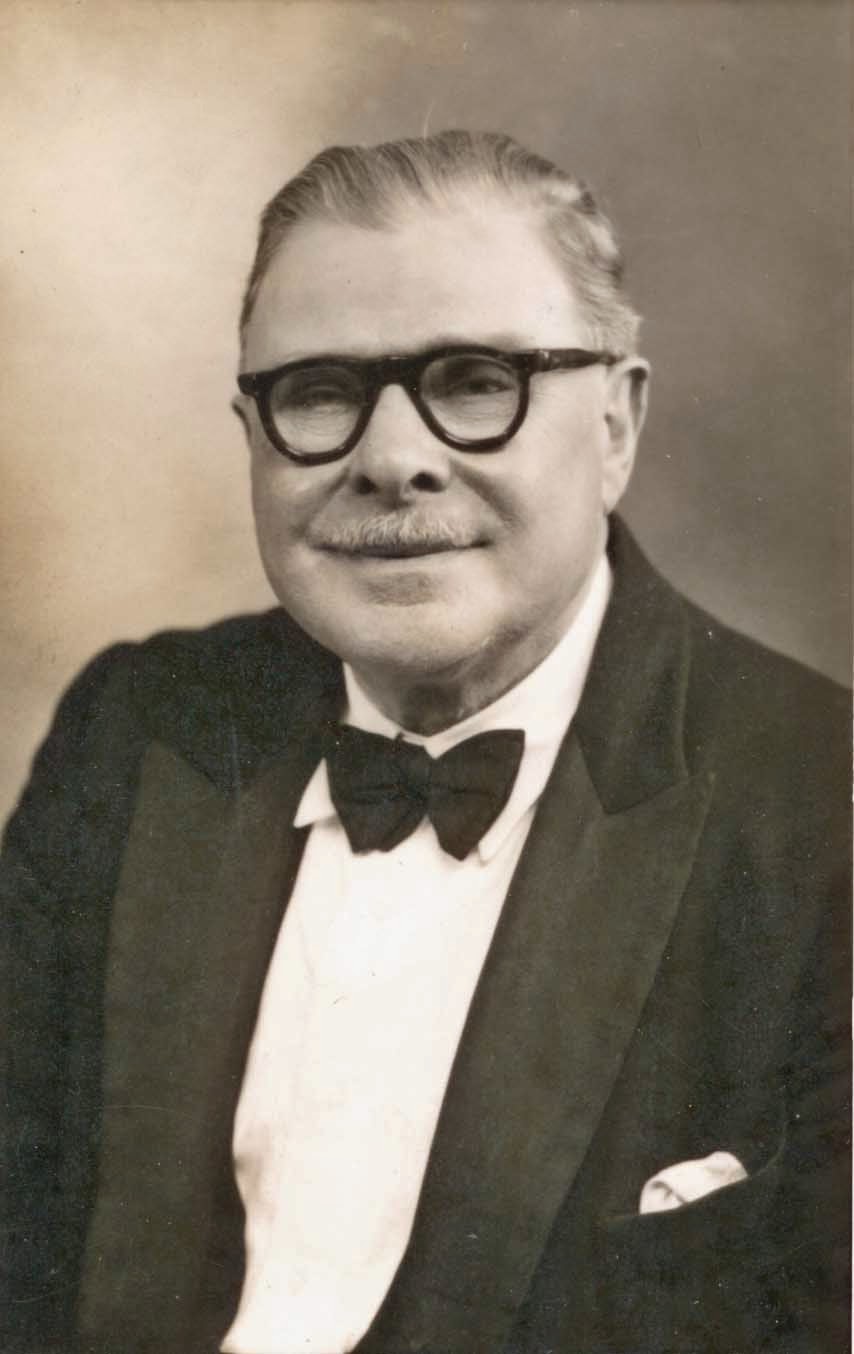 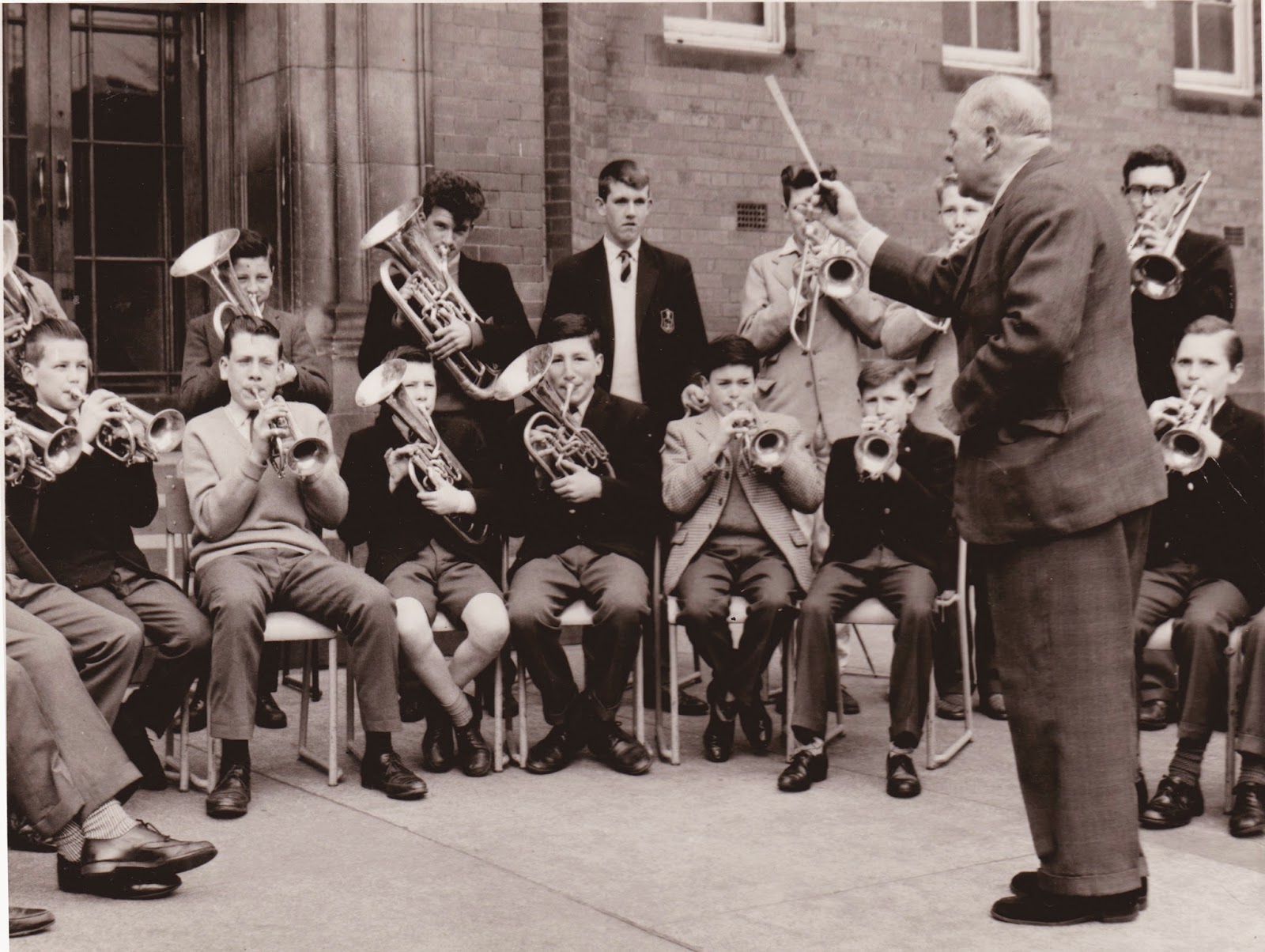 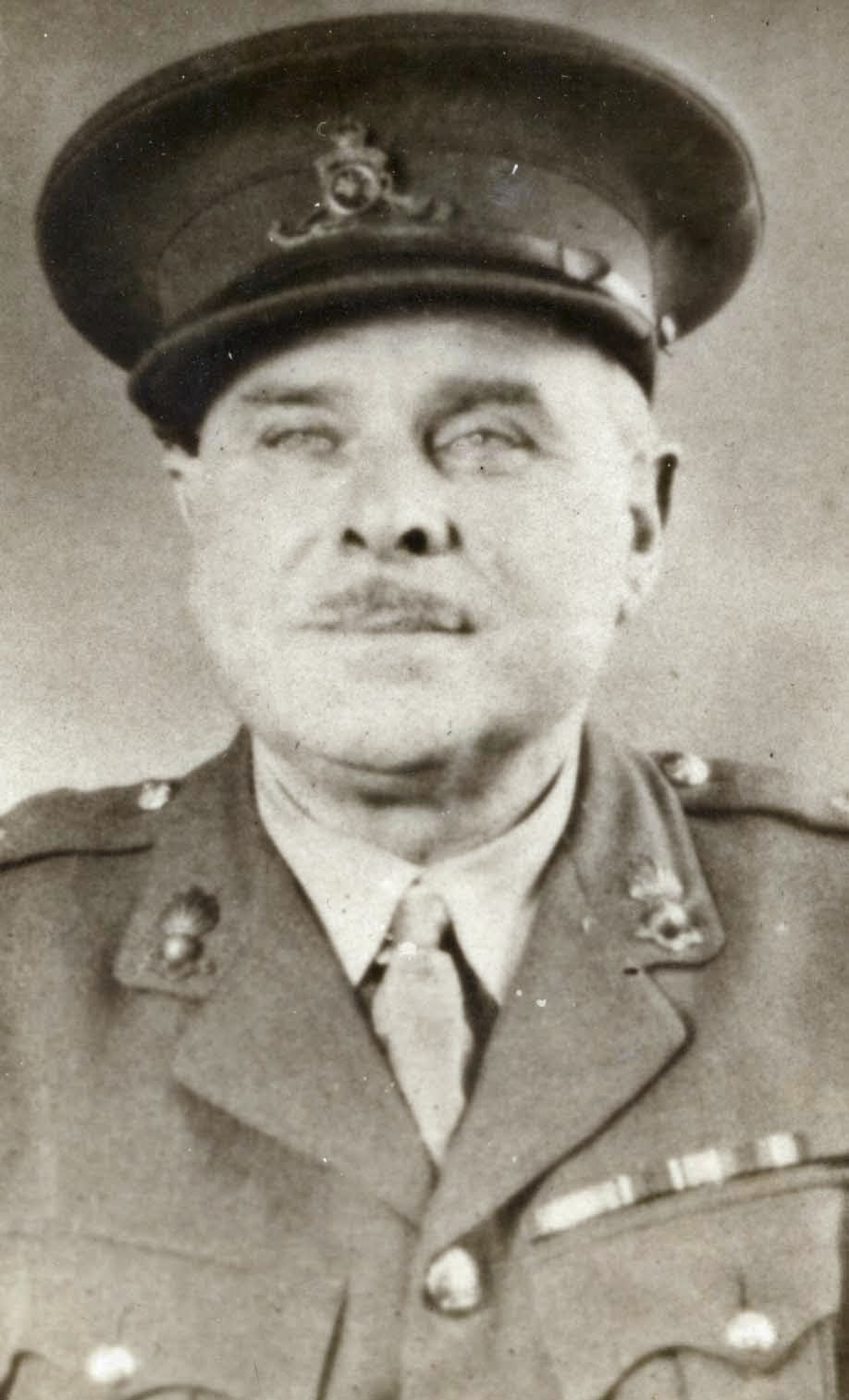 Grandpa enjoyed gardening and had a small boat on Loch Lomond and a caravan at Largs. He was one of the first of his friends to get a television, it had a tiny screen so he bought a special magnifier that sat in front. The problem was that only one person had the benefit of the magnification. He loved gadgets and would plug many into one adaptor – even in the bathroom. The house would crackle and one day Rita shot across the room after plugging in the hoover. He changed his ways after that.

We lived in London so Grandpa would stay when the bands were playing at the Albert Hall. He taught me the cornet and a very important lesson – I played the flute and just left it on top of the piano – not even a pull through – he was very cross and told me that I should respect my instrument as I was fortunate to have one. As I had never seen him angry before, it hit home.

Grandpa died in 1966 and a beautiful memorial service was held in Bonnybridge Parish Church on Sunday 11th September 1966. The Band of the 7th Argyll & Sutherland Highlanders, of which he was musical director, played Land of the Leal and the Grand March from Aida arranged by Captain Gregor J Grant. 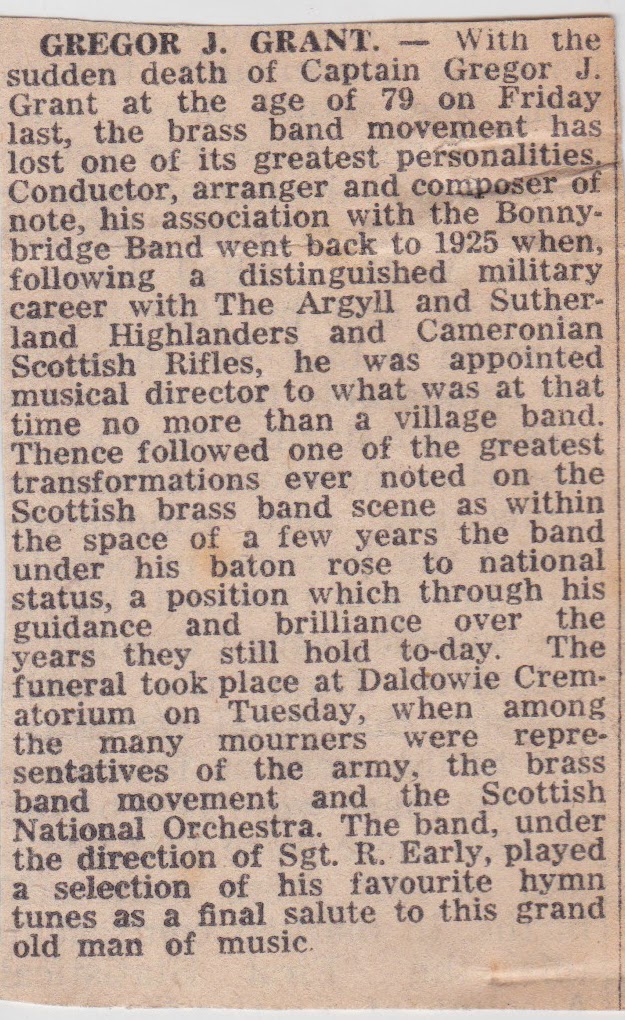 Many of Gregor's pieces and arrangements are played by bands worldwide, his arrangement of The William Tell Overture was played in the finale of the film Brassed Off ~ which would have pleased him as would Billy Connolly's lovely remark,

"My definition of an intellectual is someone who can listen to the William Tell Overture without thinking of the Lone Ranger."

As a teenager I wasn’t impressed with brass band music but now, much, much older I appreciate its beauty and intricacy and also really appreciate the music Grandpa wrote and the tunes he arranged and the generous nice man he was.